WINDOWS 11 – THE LOWDOWN. ALL YOU NEED TO KNOW ABOUT MICROSOFT’S NEWEST OPERATING SYSTEM.

Microsoft launched Windows 11 in October this year - its biggest release of a new operating system (OS) for six years. This latest platform comes with a whole host of powerful new functionalities as well as performance improvements that make better use of modern hardware. Since the announcement in June information about the system has been flooding the tech news and so we have gathered it all together to give you the lowdown on its main features and the benefits of upgrading to Windows 11.

The benefits of Windows 11

The great news is that if you are already a Windows user, upgrading to the new OS is free and should be relatively easy. As the new OS is built on the same code base as Windows 10, it means that everything that currently works with your computers… should just carry-on working. But what is the difference between the new system and Windows 10 aside from a stylish new look, and what are the benefits? Here are just some of our favourite new features: 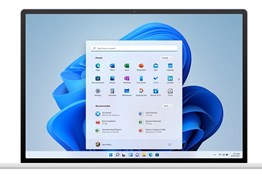 Microsoft have said that they have designed Windows 11 for productivity, creativity, and ease - simplifying the design and user experience. A new, more Mac-like interface, Microsoft Windows 11 features a smooth, clean design with rounded corners, pastel shades and a simplified Start button and taskbar that’s now in the bottom middle of the screen. It’s centred to ‘put you at the centre’ according to Microsoft. Overall, the look is modern, fresh, clean and beautiful!

As well as Teams getting a smart facelift, it will now be integrated directly into the Windows 11 taskbar making it much easier to access this platform. Given that the way in which we work has changed so much over the last 18 months, Teams has been worth its weight in gold, becoming the primary solution for communicating with colleagues, friends and family. So, having a default video conferencing solution set into the OS will feel like an excellent addition to many users.

3) Your desktop on any Windows 11 device

There will be better virtual desktop support with the new OS. Windows 11 will let you set up virtual desktops in a way that’s more like MacOS, toggling between multiple desktops for personal, work, school or gaming use and you can even change the wallpaper on each one. That means you can access your profile on any device that has Windows 11, making it even easier for you to work anywhere at any time. This is excellent news for people hot desking, hybrid workers or for switching between your personal and work profiles.

Although widgets aren’t new, they’ve been given a makeover, making them more accessible directly from your taskbar. You’ll even be able to personalise them, making it simpler to access the ones you need in just one click.

Another benefit of Microsoft Windows 11 is that it will support Android apps. However, this feature has been delayed until after the initial launch and so if you’re excited about it, you’ll have to wait a while. Once launched though, you’ll be able to use the Amazon Appstore to install and access a huge range of apps, boosting your productivity and making your life easier.

6) Easier transition from monitor to laptop, and better multitasking

The new operating system includes features called Snap Groups and Snap Layouts -  collections of the apps you're using at once that sit in the taskbar and can come up or be minimized at the same time for easier task switching. These features also let you plug and unplug from a monitor more easily without losing where your open windows are located.

Features to say goodbye to from Windows 10

As with the launch of any new system, there will always be features that we lose and with Windows 11, it’s no exception.

One feature that we’ll be saying farewell to is Cortana, the voice assistant. However, for those of you that are keen to keep it, you will still be able to use it in Windows 11, but it will no longer be pinned to the taskbar.

Skype will also no longer be integrated into the OS as Microsoft Teams has taken over as the primary way to video call in Windows 11 and now takes centre stage. If needed, however, you’ll be able to add it to your device as an app.

Microsoft has also changed some of the taskbar functionality for Windows 11. For example, you will only be able to have it positioned along the bottom of the screen and so the ability to move the taskbar to any side of the screen you wish has gone. Similarly, middle-clicking on an icon will no longer launch new instances of already-running apps as it did in Windows 10.

Finally, one of the biggest changes is that, after being in every version of Windows since 1995, Internet Explorer has now been taken out of the mix. It will, of course, be replaced by Microsoft Edge as the preferred browser.

So, although it may seem that there are going to be a lot of differences between Windows 10 and 11, it should still be intuitive and easy to navigate and overall, it feels to us that Microsoft has created a better user experience.

Is my computer compatible with Windows 11?

To see if your current Windows 10 computer is eligible for an upgrade to the new Microsoft OS, you will firstly need to check it has the right hardware in place.

One way to check is to download Microsoft's PC Health Check App for free once it's generally available later this autumn or have a look at the list below, as your machine will need to include the following criteria:

The latest news suggests that Microsoft has only promised official Windows 11 support for computers released within the last 3-4 years; anyone else will be able to run the OS if they meet the performance criteria but they will need to download an ISO file and install the OS manually rather than getting it through Windows update. They state that this is due to security and performance stability.

Once Microsoft Windows 11 becomes generally available to use, if you have the right criteria in place, you'll be able to download it in the same way you would any new version of Windows. Most users will go to Settings > Update & Security > Windows Update and click Check for Updates.

If any of your company’s computers need updating or replacing in order to be compatible with the new Microsoft OS, please don’t hesitate to get in touch with one of our sales team or your Account Manager, to give you the best advice on how to proceed.